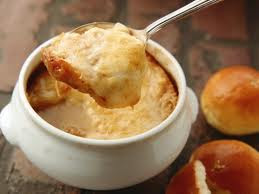 I remember the first time I had French Onion soup ... and I realized that it was amazing.  But there are a couple of secrets to it ... one, you need to slow cook the onions (covered) for about 45minutes as they caramelize.  At least that's how I like it.  Two, you need to use good Sherry.  Need I say more.

- in a large saucepan, cook onions in butter on low heat until caramelized.
- add bee broth, sherry, worcestershire sauce; bring to a boil.
- pour into individual ovenproof bowls.
- place a slice of toasted baguette in each.
- sprinkle with mozzarella.
- place under broiler and heat until cheese bubbles.
- serves 6

Email ThisBlogThis!Share to TwitterShare to FacebookShare to Pinterest
What's In It ... [soup]