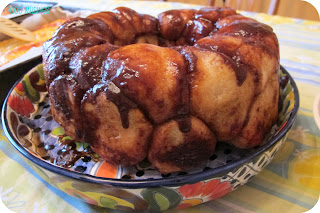 Fridays are "late start" at our kid's school ... we don't have to be out of the door until just before 9am.  This gives us the chance to have a "family breakfast" most Fridays.  So - to make it extra special, this is our tradition.  And it's a yummy one.

You make this the NIGHT BEFORE ... and are a hero in the morning.

Instructions:
1.  Grease a 10″ bundt pan and add frozen rolls.
2. Sprinkle with brown sugar, pudding powder and cinnamon.
3. Pour melted butter over all.
4. Cover with a clean, damp cloth. (leave out at room temperature).
5. In the morning, preheat oven to 350 F. and bake for 25 minutes.
6.  Let sit for 5 minutes and then turn out on a serving plate.

** I don't measure anything with this one ... I put the frozen rolls in, sprinkle half a pack of pudding .... sprinkle with a guest-a-mate of brown sugar and cinnamon ... same with the butter.  Make it as sweet or as cinnamon-y as you want ...
Recipe tested by Tawn at 1:16 PM

Email ThisBlogThis!Share to TwitterShare to FacebookShare to Pinterest
What's In It ... [breakfast ideas], [cinnamon]